Cabinet Fallout PRESIDENT Joko Widodo is currently evaluating the performance of his cabinet ministers. Some have done well, others worse. Those who merited red marks may be booted out. Looking around for replacements, the president has reportedly approached former Finance Minister Sri Mulyani Indrawati. Is this evaluation system fair and effective? Who will stay and who will go? Interview: Peter Sondakh’s Mega Deal BUSINESSMAN Peter Sondakh’s latest move has caused an uproar. His Eagle High Plantation, a company producing palm oil, has sold some of its shares to Malaysian company Felda Global Ventures, for Rp4.8 trillion. Although some charge the sale was underpriced, Sondakh insists it’s good for all concerned. Outreach: Village Torch Bearers IN June, the Energy and Mineral Resources Ministry announced it will raise its budget for alternative energy fi ve times the current amount by 2016. Meanwhile, concerned by areas deprived of electricity, a few innovators have been motivated to build power-generators using local components. Linggi, the chief of Batang Uru village in West Sulawesi has manufactured 300-turbine capacity micro-hydro  ower-generating machines, which are now used in small villages in Sulawesi as well as in Kalimantan. Then there is a group of Bandung Institute of Technology alumni, the fi rst ever in Indonesia to harness the tide from the sea to fuel a generator. Their innovative products are now used in the islands of Lombok and Bali and parts of Java. Tempo English reports. 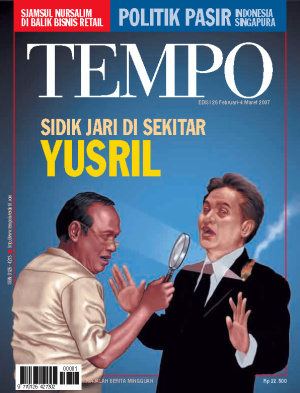 Fight to The Finish