Offshore Secrets COORDINATING Minister for Politics, Legal and Security Luhut Binsar Pandjaitan is listed in documents of the Panama Papers as director of a shell company based in the Seychelles. The fi rm, Mayfair International Ltd., is owned by two Indonesian companies. One of them, Persada Inti Energi is part of a consortium that won a tender in 2008 to build a power-generating megaproject in West Kalimantan, worth hundreds of billions of rupiah. National: 1965 Tragedy Reconciliation IT was hailed as the government’s first attempt at bringing into the open the different versions and viewpoints of the national tragedy that happened more than five decades ago. But the the gap between those demanding justice and those pushing for non-judiciary settlement seems irreconcilable. Can the symposium to ‘dissect’ the 1965 horrific events lead to eventual closure? Outreach: Going For The Reading Habit IN Indonesia, World Book Day on April 23 is not a cause for celebration. According to a 2012 United Nations Education, Science and Cultural Organization (UNESCO) survey, only one in 1,000 Indonesians are interested in reading. Such a depressing situation has prompted a number of activists to form book clubs and communities to inculcate the habit of reading and writing, particularly among the youths. Tempo English reports from Aceh, Riau and Makassar. 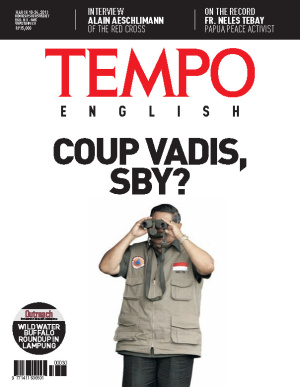